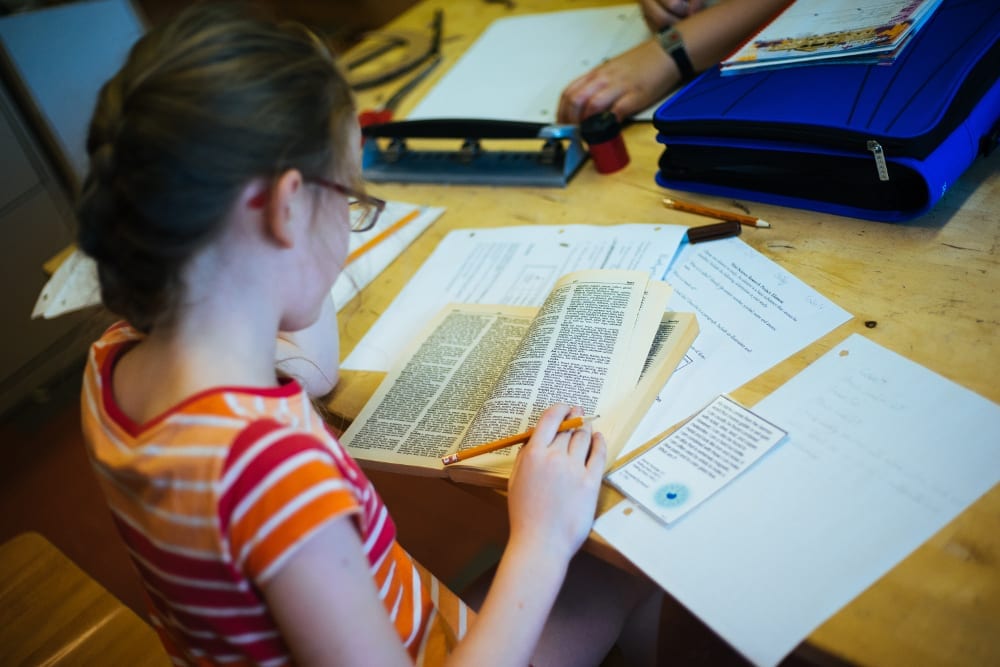 The Elementary French as a Second Language (FSL) program builds on the oral skills developed in the Casa (preschool) program. Elementary students begin reading and writing French as well as learning verb conjugations and syntax.

Elementary students attend enhanced core FSL classes in small groups of 8 to 12 students for a half-day, every other day. In addition to traditional lessons on vocabulary, grammar and verbs, the Accelerative Integrated Method (AIM) which is a gesture-based program, begun in the preschool years, is continued and augmented with plays in which all students learn all parts, and with ‘raps’ for the older students. These aspects of the AIM approach increase the comfort with which students speak their second language.

Long classes allow teachers to explore various units of interest with students from picking apples from our trees, describing them, cutting them up, cooking them and then eating them; to doing projects on native peoples or geographical landforms, all in French. Consolidated class time also means less time lost to changing classes and getting settled.

In order to enroll in our Francophone Program, a student must speak and understand French as a Francophone and have a parent who regularly speaks French to them. Students in our English language programs receive an enhanced core French as a Second Language program and benefit from interacting with Francophones throughout the daily schedule.

The FSL faculty has made a commitment to speak French to their students everywhere in the school, so you often hear French in the hallways. We also offer after school programming in French so that students may use their language skills in new environments.

Our enhanced core FSL program allows students to become as bilingual as students who attend a French Immersion  program but parents sometimes wonder why we simply don’t offer French immersion. Montessori classrooms are firmly rooted in students working independently after receiving a short lesson from a teacher about how to use a piece of material or work through an activity. Teachers introduce concepts but the students follow up with individual activities, research and projects, even at six years of age. In French Immersion, the teacher is directly teaching curriculum in order to also teach the French language. For this reason, it’s difficult to provide an authentic Montessori experience and French immersion simultaneously. It is also important to keep in mind that French Immersion classes are not the same as being immersed in a culture where French is spoken naturally all around you. In French Immersion classes it is often only the teacher who speaks French fluently.

Our enhanced core FSL program with small classes, professional, dedicated and enthusiastic teachers and consolidated class time, all within a dual language school where the Francophone culture is alive and regularly celebrated, produces adolescents capable of successfully communicating and learning in French.